Call me crazy, call me childish, but I freaking LOVE Trolls. The first movie was a total revelation for me. Poppy was my spirit animal. I wanted to live with these little creatures and sing all day with them. I was so pumped for the sequel as all my favorites would be back! I just wish the plot had been a bit more entertaining.

This new installment starts after the events of the first one. Poppy (Anna Kendrick) has been crowned queen and is getting used to her new role when she receives an invitation to a party by Barb (Rachel Bloom), the leader of the Rock tribe. Not knowing that there are other types of Trolls out there, Poppy’s father shares the story of how Pop, Rock, Classical, Techno, Funk and Country used to live all together in harmony. One day, Rock became greedy, and deciding to go out on their own, stole their magical string back. That was the end of the tribes’ unity and why knowledge about them is so scarce.

Poppy decides she’ll use Barb’s invite as a way to convince the Trolls that they are better together. Much to the dismay of her father and the rest of the Pop community, she sets out with Branch (Justin Timberlake) and Biggie (James Corden) on a journey to meet with the tribe leaders to try and persuade them to forgive and forget.

But not everything is as it seems and Poppy soon begins to realise that she has bitten off more than she can chew. She wants to do what is right as queen, but must keep in mind that her friends and family are just as, if not more, important.

I have to admit that part of me was let down by this sequel. Yes, it was adorable and the music was amazing but I simply wanted more! While I enjoyed learning more about the different music groups, they were glossed over at times and there was a whole chunk in the middle that had no singing at all.

Overall Trolls World Tour was fun. The star studded cast is a treat with some new additions such as Kelly Clarkson, Sam Rockwell, Mary J. Blige and Kenan Thompson. The musical numbers that we did have were stellar. Regardless of my expectations not being met, I would still watch if they decided to make a third film.

To be honest, I’m not sure why I was so keen on seeing this movie. I’m not a big fan of the actor who plays the main character and anything that focuses too much on religion is not usually my thing. So, I decided to branch out and try something new. The anticipation surely built up over time as well because I had to wait even longer for it to arrive on demand. At least it was worth the wait!

Jeremy Camp (K. J. Apa) an aspiring music star, moves to California so he can attend a special school in order to help and perfect his craft. Coming from a humble family who scrape by on what they can, he is a fish out of water in his new surroundings.

Enter Melissa Henning (Britt Roberston). Jeremy spots her in the crowd at one of his gigs and the rest is history. He falls completely head over heels for someone he barely knows and vows to do whatever he can to make her his. However, Melissa is adamant that she will focus on her studies this year and have no romantic entanglements. Still Jeremy is persistent and while they begin to spend more time together, Melissa finds herself falling right back.

But this is not your typical happy go lucky romance story. In fact, it is the complete opposite. Melissa has a secret and it is one that could upend both her life and Jeremy’s. Before he knows it, he is forced to decide what is truly important to him, his family and above all, his faith.

Based on the true story of Jeremy Camp’s life, this movie is a tearjerker that had me sobbing long after the credits stopped rolling. The extreme selflessness and love that Jeremy depicts throughout all the obstacles that are thrown at him is inspiring and touching. I had no idea that these events actually happened. This only had a stronger impact on me while watching.

Despite me not liking one of the celebrities, even I have to admit that he did a brilliant job at portraying the young musician. It was refreshing to see Apa in a role outside of Riverdale and to witness his range. The rest of the cast consisting of Melissa Roxburgh as Melissa’s sister Heather, Nathan Parsons as fellow Christian star Jean-Luc La Joie and even Shania Twain as Mrs. Camp were also perfect in their roles.

I’m not lying when I say that I was worried about the heavy religious influences, but it actually didn’t bother me as much as I thought it would. The most important thing was the story and how beautiful it was. Love sometimes really is all you need. 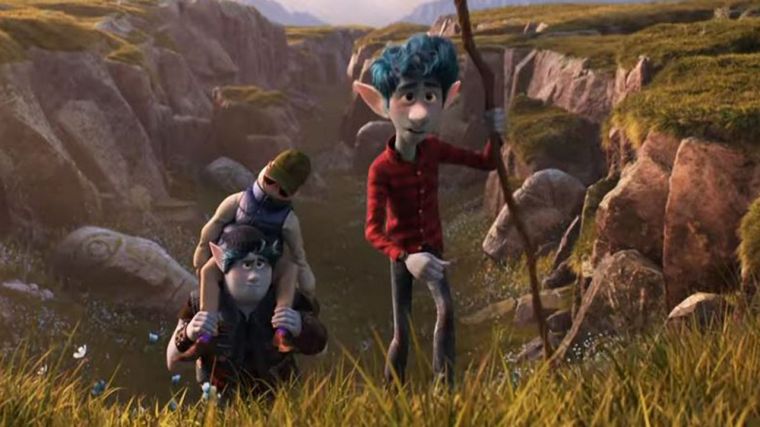 Pixar movies, much like Disney itself, are anticipated by everyone around the globe. Young and old, it doesn’t matter – they are beloved. So, when news came that Onward was next in the line up, you would have expected me to be excited. Well, you would be wrong. Sure I would go and see it regardless, but there was something about the storyline that didn’t completely interest me.

Onward is about two brothers who couldn’t be more opposite. Ian (Tom Holland) is socially awkward, shy and doesn’t have many friends as a result. Barley (Chris Pratt) is outspoken, loud and often finds himself in all sorts of trouble.

On Ian’s birthday, his mother presents him and Barley with a gift from their late father. Wilden Lightfoot was a renowned wizard in his time. Many people knew who he was and his loss was felt all across the magical world. The gift in question, his staff, comes with a spell that will allow the boys to bring him back for twenty four hours. Never having conducted magic before, the boys give it a try. Ian is ultimately successful, but only half so as Wilden Lightfoot is left with only the bottom half of his body.

In order to complete the spell, Ian and Barley embark on a quest for the Phoenix Stone. Many hijinks ensue and the brothers find themselves in a variety of crazy scenarios. However they will stop at nothing to see their dad again, especially Ian who has very little memories of the man to begin with. As their journey unfolds, they realise along the way just how important family really is.

I am pleased to report that the film was better than I thought it was going to be. There were a lot of funny moments and in true Pixar fashion, some tears were shed too. The cast is made up of some brilliant talent complete with Julia Louis-Dreyfus as Ian and Barley’s mom and Octavia Spencer as The Manticore, a mystical creature who becomes an ally to the Lightfoots.

While the plot did keep me guessing, I expected more at the end of the day. There’s nothing I dislike more than feeling dissatisfied after leaving the cinema.