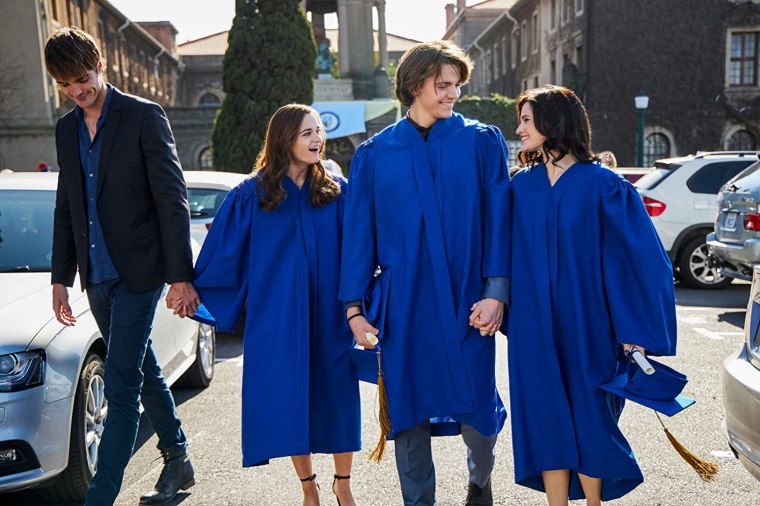 Teen movies are all the rage nowadays and I have to say that I can’t seem to get enough of them. No matter how cringe they may seem, I am so there. I had watched The Kissing Booth sometime back when it first came out on a whim. I didn’t know anything about it and only put it on because I was bored, but I remember being surprised at how much I liked it! So, when the second film came out last month, I was looking forward to it, but it had kind of fallen off of my radar? I need to stop disregarding this franchise because it really is great!

This movie starts off more or less after the events of the first one. Elle (Joey King) has just seen Noah (Jacob Elordi) off to the airport as he is about to begin his first year at Harvard University. While deciding to pursue the long distance thing, they both agree that giving each other some space to start off with is a good idea. This is beneficial for Elle who has to start thinking about what colleges she would like to apply to.

But when Noah asks her if she’d consider looking at Harvard, Elle feels like she is being pulled into two different directions. Ever since they were kids, it was always the plan for Elle and her best friend Lee (Joel Courtney) to go to Berkeley together. There is also the tiny detail that Elle’s dad doesn’t have too much in his savings to send her to such a prestigious school which she needs to consider.

When Elle finds out about a Dance Dance Revolution contest, she jumps at the chance to sign up. That’s her and Lee’s game and the prize money would be more than enough to pay her tuition. However, Lee has other things to worry about. His girlfriend Rachel (Meganne Young) is worried that Elle is imposing on their ‘couple time’ as she is alays trying to integrate herself into their plans. Lee, deciding it’s best to bow out of the contest, arranges for new kid Marco (Taylor Zakhar Perez) to take his place. Marco and Elle start spending all of their spare time together and she can’t help it when sparks begin to fly. Maybe she wouldn’t be so confused about her feelings if Noah wasn’t spending so much of his time with classmate Chloe (Maisie Richardson-Sellers) and posting about it all over social media.

I like these films because they are, for the most part, realistic. Elle goes through various scenarios that an actual high school senior would which makes her relatable. In addition to that is the love story between Elle and Noah that just makes you want to swoon (we’ll just ignore the fact that Jacob Elordi seemed totally off during filming…)

The only thing that bothered me was how silly Elle and Noah were acting the whole time. I understand that the point of the storyline was to create conflict, but their actions were often foolish and could have very well been sorted by a simple conversation. There was a lot of back and forth between them and while you want them to work out, you can’t help but fall for Marco and Chloe’s charms at the same time. At least their bickering and arguments weren’t anything at all like Lara Jean and Peter Kavinsky. At the end of the day, The Kissing Booth trilogy is the more superior for sure!